This article originally appeared in the second issue of Boundless Magazine in March 2021.

I hear their echoing huffs of breath before I see them. Gradually out of the sunset glow, dorsal fins appear: the males’ upright and as tall as a man, the females’ smaller with a gentle curve, and the orca calf’s fin so tiny it brings to mind a cute toddler. As the sky shifts to pink, the orcas race across the strait. Each time one dives beneath the surface I hold my breath, exhaling gleefully when it surfaces still closer, breathing out a fine whispering mist that shimmers in the evening light.

Before setting off on a multi-day kayaking trip in Johnstone Strait off northern Vancouver Island, our guides Joshua Ariano and Alicia Mildner give a full orientation to the region and our gear. They also explain that spotting whales isn’t guaranteed—but thanks to nutrient rich currents circulating through a landscape of islets and inlets—there would be seabirds, dolphins, seals and even bioluminescence, an algae that adds a nighttime glow to the area’s winding sea passages.

The whales have their own idea though, and on our first night out, I watch in stunned amazement as a pod of five or six whales swim toward our campsite. Just meters from the steep beach they dive and begin rubbing their bellies in the rocky depths. As the night grows darker, the activity continues—the muffled rumbling of rocks joining the puff of surface exhalations. Quietly, as white moonlight replaces the sunset’s final pink hues, Ariano explains the belly rubbing.

In British Columbia, the Northern and Southern Residents; Offshore; and Bigg’s / Transients orcas make up the four unique populations that migrate through the region’s coastal passages. The orcas’ territories overlap, but each ‘ecotype’ has its own culture; the whales consume different foods and never cross mate. Beach rubbing is unique to the Northern Residents, they’re the only whales that rub their bodies over sloping shelves of smooth rocks.

Here, in the traditional territories of the ‘Namgis (NOM-gees), Mamalilikulla (Mamma-leel-eh-quala) and Kwikwasut’inuxw Haxwa’mis (Kweek-soo-tain-nuk-an-kwa-a-meesh) Peoples, the rubbing behavior has been known since time immemorial; stories from the ancient Nations include it. According to one myth, a whale spotted swimming near shore was a human transformed into a whale--now trying to communicate with his family.

Scientists don’t know why orca’s rub their bellies—but say each family group has favourite beaches. Our guides say they know of several rubbing beaches in the area; but it’s unpredictable so it’s special to see.

As the night grows cool, I head to my tent. The orcas are still rubbing and I fall asleep to their hypnotic whooshes of breath. In the morning, we pack up our kayaks and paddle deeper into the islands; into passages that wind through the traditional territory of the Mamalilikulla and Namgis People. Coming around one bend, we again catch sight of the orca pod in the distance. We stop paddling and watch as they forage and play. Finally, they swim away. When all that’s left is the fine mist of breath drifting above the water, we paddle on.

Visit Canada’s remote subarctic tundra, where the rugged yet pristine terrain is accentuated with shocks of pink fireweed. Churchill, Manitoba is home to hearty locals and a distinctly Canadian safari. With more than 3,000 Western Hudson Bay beluga whales summering in the Churchill River Estuary, you may spot them from the air during flights to and from your lodge. But the real action happens on boat and kayak tours in the Seal River Estuary. These tours will give you the thrill of seeing and hearing beluga whales from a close, yet respectful distance as they congregate to feed and raise their young. Though this experience alone is worth the trip, Churchill is also one of the best places in the world to see polar bears.

Newfoundland and Labrador is home to the world’s largest population of humpback whales. Enjoy the view from the rail of a boat as you crest the Atlantic, with the variety of seabirds, the icebergs, and the Newfoundland coastline there to greet you. The smell of the ocean and the fresh breeze clears the head, while the power and scale of the water has you feeling almost child-like again. Binoculars give you a glimpse of whale spouts in the distance and you can hear the slap of flukes along the water. Then, you catch sight of a whale close by the boat and your heart begins to race.

The best time to go whale watching in Newfoundland Labrador is from mid-May to September, with the peak season being from mid-July to mid-August.

Discover more about Super, Natural British Columbia, set between the Rocky Mountains and the Pacific Ocean. 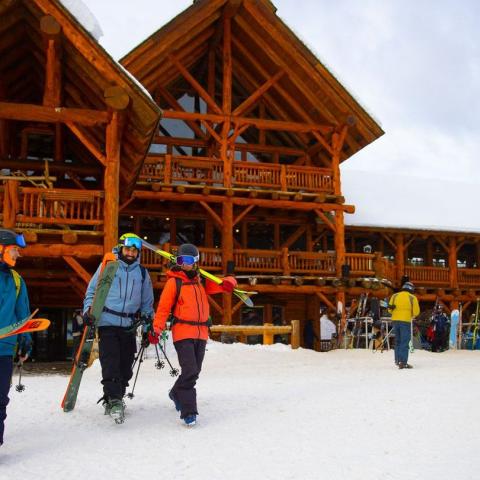