There is plenty to see and do at Montréal’s family-friendly and treasure-filled museums.

Founded in 1860, the Montreal Museum of Fine Arts (MMFA) is one of the top 15 most-visited museums in North America. Located in the historic Golden Square Mile downtown, the museum’s encyclopedic permanent collection contains some 43,000 works – from European Masters to the MMFA’s dazzling Napoleon collection – much of it on display in the museum’s five connected pavilions. The MMFA also creates and hosts travelling blockbuster exhibitions. The MMFA complex includes the 460-seat Bourgie Concert Hall, a movie theatre, boutique and bookstore, as well as the Beaux-Arts Restaurant.

Pointe-à-Callière is the largest archaeology museum in Canada, built on the very site where Montréal was founded in 1642. In addition to permanent exhibitions – such as Where Montréal Began and Pirates or Privateers? – the museum presents its multimedia Generations MTL show about the city’s storied history. Pointe-à-Callière also regularly presents travelling blockbuster exhibitions and is home is to a gift shop and L’Arrivage Bistro.

The McCord is a social history museum that celebrates the history, people and communities of Montréal. Comprising one of the largest historical collections in North America, its 1.5 million artefacts include a great photography collection anchored by The Notman Photographic Archives. The McCord presents exciting exhibitions, educational programming and cultural activities year-round, including a summer day camp, music concerts and blockbuster travelling exhibitions. Their hugely popular After Hours at the McCord evenings for young professionals combine cocktails with culture.

The museum has temporarily relocated to Place Ville Marie during its transformation.

Founded in 1964, “the MAC” or “le MAC” (as the Musée d’art contemporain de Montréal is affectionately called by locals) has become one of the world’s great contemporary art museums. The museum presents temporary exhibitions devoted to Canadian and international artists. The MAC also presents special events, including its popular Nocturne evenings featuring DJs and cocktails.

The Canadian Centre for Architecture is not just an architectural jewel in the heart of downtown Montréal, but a world-renowned museum of architecture and international research institution that believes “architecture is a public concern.” The museum was founded by Montréal philanthropist and architect Phyllis Lambert, and produces exhibitions, publications and a range of activities about how architecture shapes contemporary life.

From exploring our natural world to outer space, children of all ages can discover new worlds at the Space for Life, the largest natural sciences museum complex in Canada, which comprises the 75-hectare Montréal Botanical Garden, state-of-the-art Rio Tinto Alcan Planetarium, the hugely popular Montréal Biodôme (whose name means “House of Life” and is home to more than 4,500 animals from 250 different species), and the Montréal Insectarium, one of the largest insect museums in North America. The Insectarium reopens on April 13th after major renovations.

The History of the Holocaust Told by Survivors permanent exhibition at the Montréal Holocaust Museum features artifacts donated by Holocaust survivors living in Montréal, home to the third-largest Holocaust survivor population in the world. The mission of the Montréal Holocaust Museum is to educate people of all ages and backgrounds about the Holocaust, while sensitizing the public to the universal perils of antisemitism, racism, hate and indifference. Located in the West End, the museum also presents seasonal events and exhibitions.

Open seven days a week, the Montréal Science Centre in the Old Port is a family-oriented museum that, via temporary and permanent interactive exhibitions, explores how science and technology shape our lives. There is a giant IMAX® TELUS Theatre with a massive 36,000-watt sound system, as well as a gift shop and food court. Wheelchairs are also available for free at the box office.

The multi-media, LEED-certified eco-friendly Phi Centre in Old Montréal, and the neighbouring Fondation Phi pour l’art contemporain, were founded by visionary Montréal patron of the arts Phoebe Greenberg. The Phi Centre includes an art gallery, cinema, theatre, performance space and production facilities, and presents exhibitions and shows year-round, while the Fondation Phi pour l’art contemporain is a private museum with no permanent collection and presents a couple of exhibitions per year.

The Château Ramezay – Historic Site and Museum of Montréal

Originally built in 1705 by Montréal’s then-governor Claude de Ramezay as his personal residence, the Château Ramezay is the oldest private historical museum in Québec. Permanent and seasonal exhibitions attest to the far-reaching history of Montréal, but none so much as the Château Ramezay itself, which served as the Canadian headquarters of the American Revolutionary Army in 1775 and 1776, and where Benjamin Franklin stayed when he tried to persuade Montréal to join the revolution. In summertime, the Governor’s Garden, located behind the building, evokes the gardens of New France, and comes alive with the Anciennes Troupes Militaires de Montréal parading in period military uniforms.

Created in 1992 to mark Montréal’s 350th anniversary, the Musée des Hospitalières de l’Hôtel-Dieu de Montréal and its permanent exhibition chronicles the origins of Montréal, the history of the Hôtel-Dieu and the Hospitallers of Saint-Joseph. The unique collection also documents the evolution of medicine and health crises that have struck Montréal over the centuries. The museum also presents temporary exhibitions, and offers group and school tours.

Created in 1992 to mark Montréal’s 350th anniversary, the Musée des Hospitalières de l’Hôtel-Dieu de Montréal and its permanent exhibition chronicles the origins of Montréal, the history of the Hôtel-Dieu and the Hospitallers of Saint-Joseph. The unique collection also documents the evolution of medicine and health crises that have struck Montréal over the centuries. The museum also presents temporary exhibitions, and offers group and school tours.

OASIS immersion presents all-immersive temporary exhibitions inspired by the people, places and trends that shape our world, in its brand-new all-immersive 2,000 m2 (over 21,500 ft2) museum-like location on the ground floor of the Palais des congrès de Montréal. The walkable, no-contact experience features three immersive galleries, two dazzling light installations and a lounge area with café and boutique. Plan on at least 75 minutes for your tour of OASIS immersion which offers starting times every 20 minutes throughout the day. 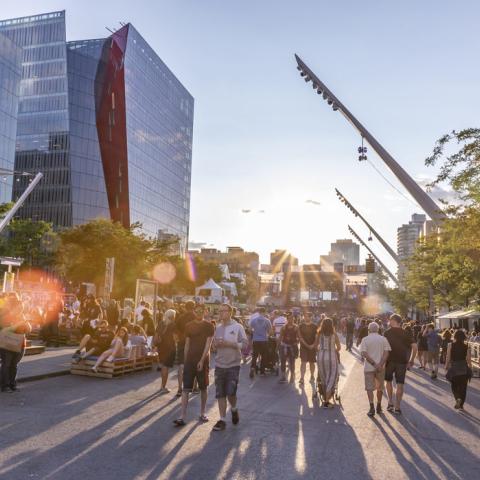 Summer 2022 is festival season in Montréal!