For some reason, I expected somebody my parents’ age to pick me up for my wildlife tour in Jasper National Park. As I waited in the hotel lobby on a snowy Saturday morning, a young guy with a dark beard strode in with a clipboard. He wore a toque emblazoned with the logo of a craft brewery. Who’s this? I wondered. A delivery guy?

I’ve got to get this off my chest from the outset: I was wrong, Pete. I was wrong. It wasn’t fair of me to expect you to be in your 50s. Millennials can have encyclopedic knowledge of park fauna too. I see that now.

Pete Limoges, who is 29, was my guide on SunDog Tour Co.’s Winter Wildlife Discovery Tour. Originally from Montreal, Limoges was drawn to Alberta largely for its rugged mountain parks and their iconic animals, which loom large in the Canadian psyche from coast to coast. “The Canadian Rockies had the adventure, wilderness and opportunity I was looking for,” Limoges said.

Coyotes may look like a cuddlier version of your neighbor’s German shepherd, but there’s a reason the species is portrayed as a trickster in many of the stories of Alberta’s Indigenous people. No petting. For real. Bad idea. Seriously.

As we drove east out of the Jasper townsite, Limoges quickly proved his prowess as a guide, spotting what the rest of us on the tour missed. He alerted us to a coyote, about 1,000 feet away, sitting on the crest of a small hill, surrounded by a flurry of ravens. With their narrow muzzles and pointed ears, coyotes have a mischievous look. This one posed for a while against a dark backdrop of pines as we snapped photos. Then, another sighting: Limoges narrated the dramatic appearance of a bald eagle soaring in circles high over the coyote. I felt like I was witnessing a scene from a nature documentary. Eventually the coyote loped across the road right in front of us, went into the trees, and was gone.

If you’ve ever scrambled up a slope, you probably have an inkling of how difficult it is to get around in the upper reaches of the Canadian Rockies. Now try doing it with 13 kilograms of ram horns fastened to your forehead. That’s the life of a bighorn sheep.

Look up — waaaay up — and you can often see these curly-horned sheep on cliff bands along the highway, balanced on tiny perches of stone, where they go to find salt deposits. With their cloven hooves, bighorn sheep are the real climbers of the mountains, tackling impossibly steep pitches with ease. At many places we stopped, Limoges set up a spotting scope so we could take a closer look at the animals. Through the scope we could see a large black and white magpie bird sitting contentedly on one sheep’s back; Limoges explained that the furry coats provide a convenient source of bugs for birds. We also got our morning exercise in. Limoges called it a “Canadian workout” as he passed around a heavy, rock-solid set of ram horns.

During winter’s hibernation season, you’re not likely to spot “Jasper’s monarchs,” but you can’t spend much time in the Canadian Rockies without grizzly bears on your mind. And your mind might be the best place to keep them: there’s a reason those bear aware signs are everywhere in the national parks.

These immense animals once freely roamed the North American plains. Now they survive in small numbers in the mountains (Jasper National Park has about 110 out of a total of around 1000 in Alberta). Although it is considered a meat eater, the grizzly bear is actually omnivorous, with plants making up to 80-90 percent of its diet. All that eating makes the grizzly bear the second-largest land carnivore in North America. But don’t let its bulky size fool you, the grizzly bear can run at speeds of up to 34 miles per hour.

Wapiti, more commonly known as elk, are among the park’s most dignified-looking animals with their immense antlers. But the grace and grandeur of the elk may be slightly tarnished if you hear the mating call of the male, which Limoges likened to a boa constrictor blasting away on a trumpet. “Just this awful, horrendous whistling.” Outside Jasper, we found about 30 wapiti by a side road. Our timing was lucky as wapiti shed their antlers toward winter’s end. One male wapiti we spotted had recently lost an antler, and shook his head comically, trying to flop the remaining antler off—insecure about his asymmetry, Limoges said. “I’ve always liked elk, because they have the most character.”

The moose, the largest species of the deer family, is arguably the most Canadian animal of them all. In a classic 1979 film short called the Log Driver’s Waltz — a cultural staple for a certain generation of Canadian schoolchildren — a plaid-clad log driver leaps deftly over a solitary moose in a river. The image is scientifically accurate, so far as the moose goes. Moose enjoy standing around in water, and are in many ways individualists. Unlike wapiti, they prefer solitude to hanging out in groups. Their palmed antlers aren’t only used for sparring for supremacy in mating season: from Limoges we learned of a more recent scientific discovery. Moose antlers also double as hearing aids of sorts, capturing sounds from across the lake or forest.

Those are just some of the species you can find in Jasper. All around Alberta, there are many fascinating animals you can find roaming the prairies, forests and mountains. Banff National Park recently reintroduced bison. Keep your eyes peeled for wolverine tracks in the snow, because they live here too. Black bears patrol the mountains with their kin, the grizzlies. A snowshoe hare darting across the road could mean a lynx is nearby. Up on the cliffs with the bighorn sheep, you’ll often spot mountain goats. Cougars also roam among the trees, as do wolves. Keep your eyes peeled. 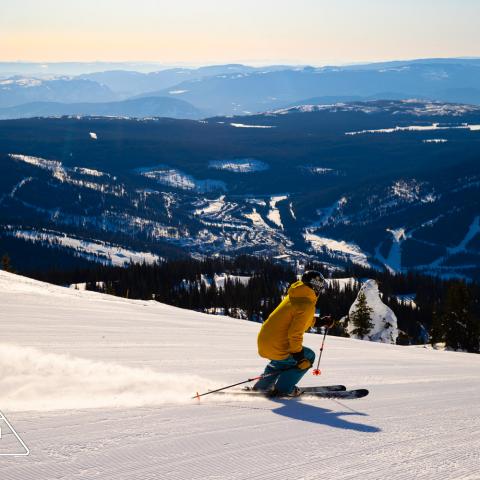 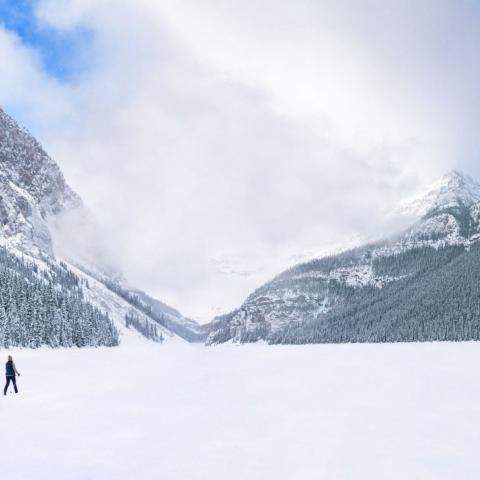 Winter wonder in the Canadian Rockies